After a journey of more than 7,500 kilometers and 2 months on the Atlantic and the Pacific Ocean, passing through the Arctic Islands of northern Canada, Yvan Bourgnon arrived in Nuuk (Capital of Greenland) on Friday, September 22, at 0:12 local time. He completes the Bimedia Challenge and becomes the first skipper to achieve the Northwest Passage on a single-handed sport catamaran, without cockpit or assistance

Starting on July 13th at 8:30 am from Nome in Alaska, Yvan moored at 12:12 am today in Nuuk, Greenland, after a fight that led him to go beyond his limits .

71 days at risk, without ever having the right to make mistakes, as the conditions of wind, air temperature and water, drifting ice, unlisted rocks, threatened the integrity of “Ma Louloutte “as well as his life.

To this constant stress was added the intense cold and the constant humidity of the rain or the spray: “I discovered what was the fear at sea. I am aware of having exceeded my limits, I learned a lot from this challenge. Everything was trying to put me to the sea, and the water at 2 ° C was assured death. “

Here is a BEST OF of the hard and beautiful moments, of this major feat accomplished by Yvan:

Departure from Nome Alaska on July 13, after 15 days of boat preparation.

Bering Strait: Russia and Siberia to port, Alaska and the United States to starboard: “I passed by Diomedes Islands 3 km away, one side is Russian the other American.

The beginning of the rain, which will be raining for more than one week including more than 36 hours without interruption.

Point Barrow: The first ice gate, where a narrow passage will open just in time to let Yvan pass. The first growlers, the white line of the ice floe it runs, seals, whales and sperm whales offer a majestic spectacle.

The fall at the sea, at Prudhoe Bay: As he runs out of the chain, the cleat pulls out and Yvan unbalanced falls overboard. he exhausted himself by going back on board and had an infinite time to warm himself.

The first polar bear is seen at the entrance to the Gulf of Amundsen, alone on a growler of about fifty meters. Surrounded by hundreds of islands, islets and rock heads in the narrowest part of Amundsen Sound, lack of mapping is a major stress factor.

Anchorage of all dangers at Hat Island : The strong wind transforms the anchorage into a trap. “My Louloutte” is close to the grounding and Yvan has to get into the water to prevent it from hitting the rocks: “In addition to the anxiety of losing the boat, the cold below zero has frozen water on board and I could not drink anything during these efforts.

Talayoak : Yvan was forced to stay at anchor for a week, The necessary repairs on the pilots who had pushed him to calm, took three days, but the pack ice barred the road to the North so it was useless to go back to sea.

Weld Bay, 3 U-turns near the Tasmania Islands: The Bimedia Challenge almost came to a stop in Weld Bay where the forced break lasted 12 days because of the ice barrier. After 3 failed attempts to cross the ice cap that blocks the passage a few miles from this anchorage, and huge risks for “My Louloutte” and for his life, Yvan had to wait.

The Straits of Bellot : After a dozen hours of sailing upwind, often surrounded by ice cubes, Yvan arrived at the Bellot Strait under the snow and at least 2 °.

Collision with a walrus : Thinking first of a rock, Yvan sees the walrus in his wake.

Hatt Bay : Yvan anchored in Hatt Bay for shelter and, as expected, the wind blew in a storm. The catamaran has several times found on a hull!

In the footsteps of Amundsen : a tug pulling the barge from Amundsen’s boat had reached the same bay of Hatt; Frightened Yvan saw the tug hunt, and the barge behind him, come into contact with the wet sailboat a little behind. : “For a moment I even feared that this team will arrive on me and take down” My Louloutte “!

The strongest storm experienced with “Ma Louloutte”: Between the mountains east of Pond Inlet. “The wind rose to 70 knots at night . To reduce the speed and control a little this leak, I launched my 2 floating anchors … And also my two classic anchors! Despite that, I was still going to 6 knots dry canvas. “

Clyde River : Strong winds and strong seas force Yvan to descend along Canada. He arrived at the Clyde River where he stopped ; it was the opportunity to do a complete check up of “Ma Louloutte”

The surprise guest of Qikiqtarjuaq : In the night, at anchor, Yvan is alerted by an unusual position of the boat, whose bows plunged below the surface and the transom rose 1 meter above the water: “In front of me at the level of the bows, a polar bear had both paws resting on the deck of the port hull which sank under the water. “

The massive icebergs of Davis Strait : The beginning of the crossing to Greenland is dotted with real ice buildings of nearly 500 meters long and 100 high. It is also the return of cloudless nights and the first aurora borealis.

He Arrived at Nuuk and the ended the Bimedia Challenge at 0:12 am on the night of Thursday 21st to Friday 22nd after 71 days. 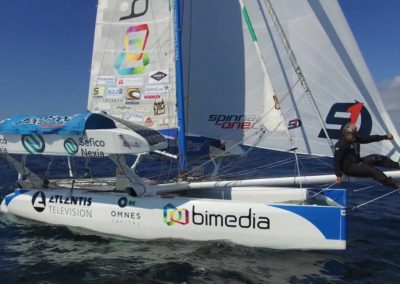 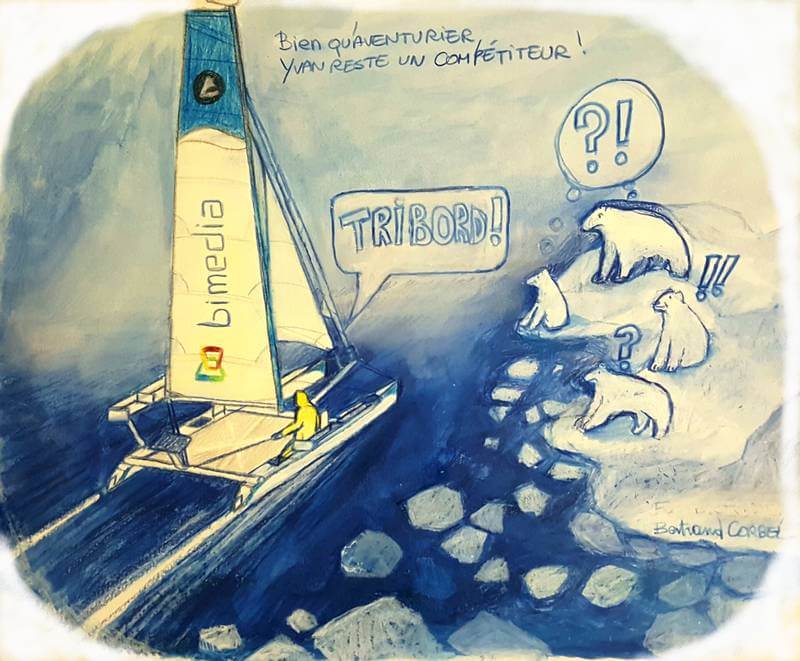 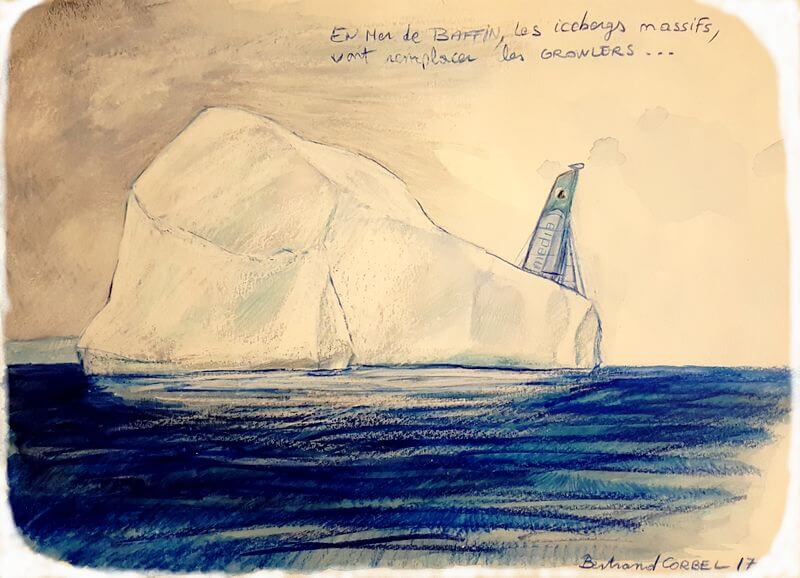 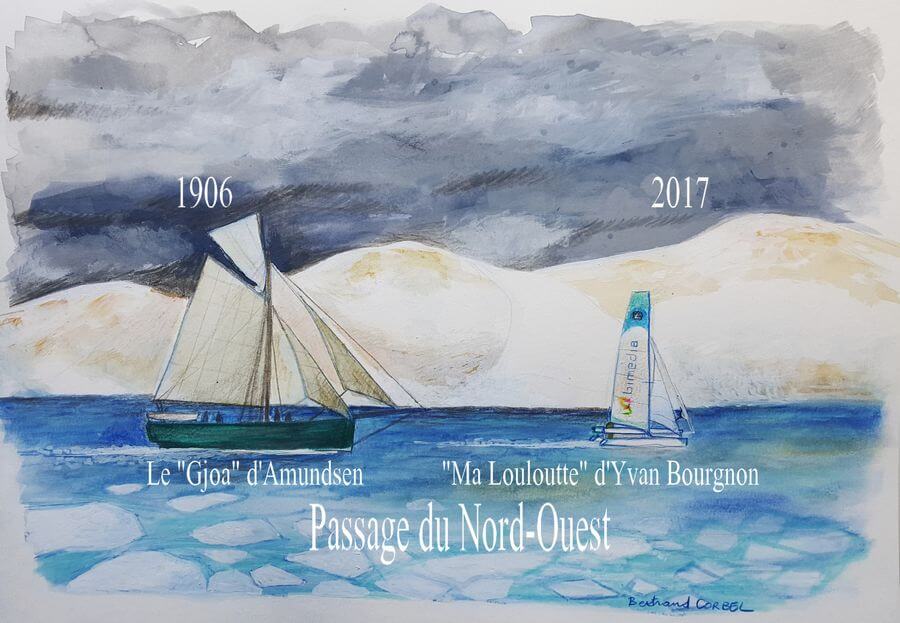 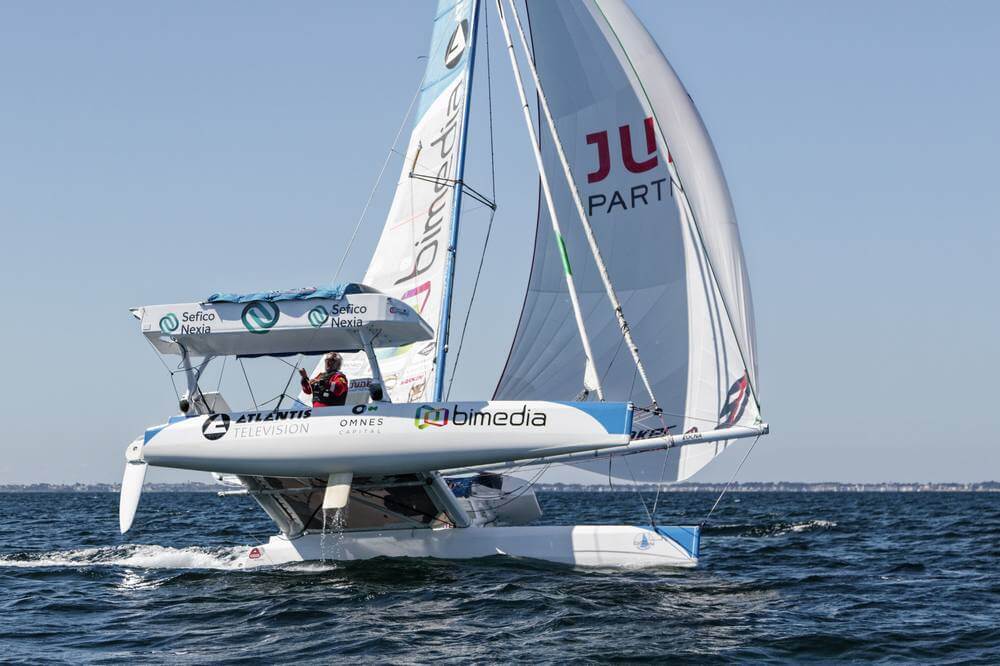 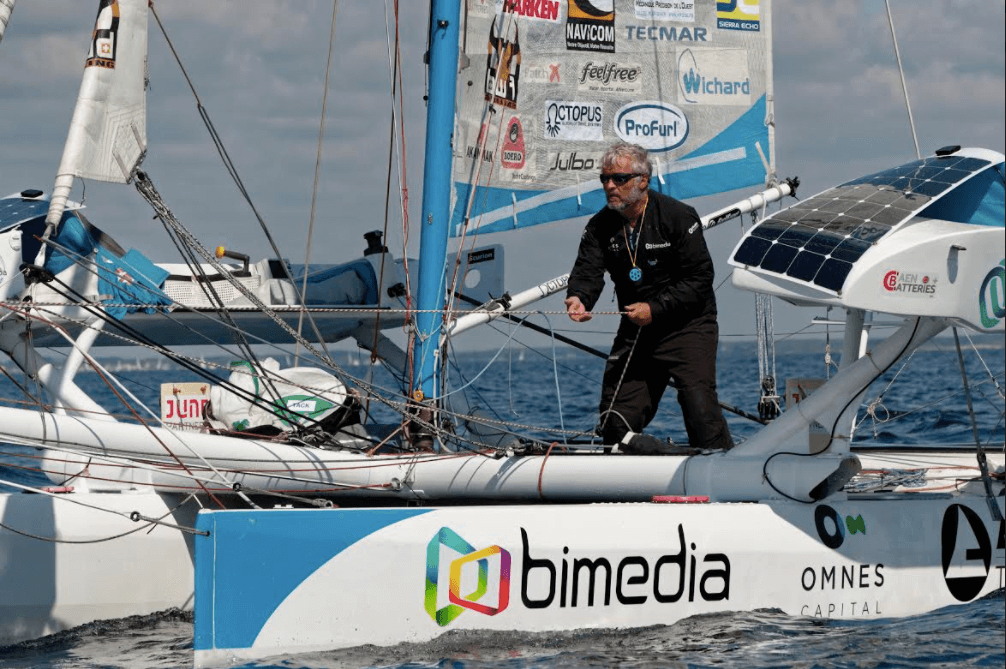 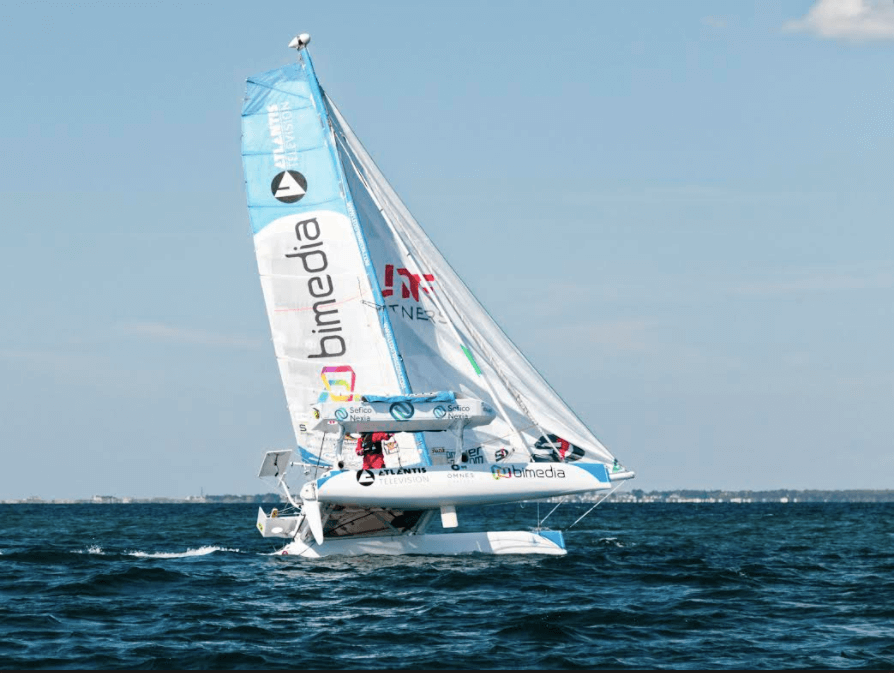 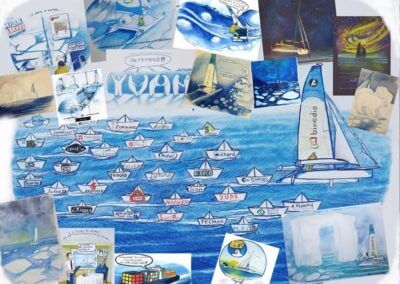 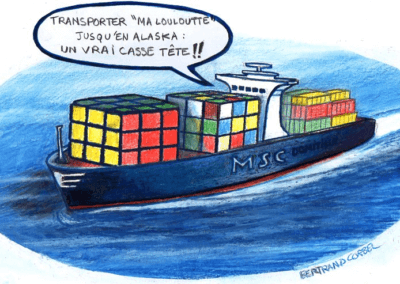